It's 2 AM...what am I doing up writing this blog? I shall get to that in a minute, but first I must apologize for being a bit lax in my blog posts lately...it's the cold...I may have mentioned this before but I really don't like the cold...I am a Sun Worshipper. Cold weather makes my circulation slow to a crawl, my nose runs, my eyes water and my fingers curl up into pathetic claw-like appendages that seem to be grasping desperately for warmth. Winter has hit Southern California like the Grim Reaper, sweeping over the beaches and covering all forms of life in ice....well, OK, maybe not ice..there is no actual ice, but it IS cold with daytime temperatures barely getting out of the low 60's sometimes with a windchill and nighttime temps plunging into the 40's, or as they would say in Seattle, beautiful balmy weather. But as I may have mentioned before, Seattle-ites are all crazy and the proof of that is that they live up there in the frozen tundra where people have to hack through the frozen ice to hunt for seals and then use clamshell scraping tools to carve out the seal blubber to put in their latte's. I know this because my friend Ethan told me all about it and he lives up there...well, he told me about the Latte's anyway...he didn't mention the seal blubber and stuff but I think he was just trying to put a good face on things. So putting the warped perspective of Washington residents aside, it's freakin cold. People here are wrapping scarves around their necks and wearing coats!...AND hats! Which brings me to why I am up at 2AM writing this blog. We are fast approaching the shortest day of the year, which is one of those things that people here in Southern California often point out. It is a way of being optimistic about the brutal conditions we are trying to endure here. Soon the days will begin to lengthen and Spring will be in sight. It's how we hang on through the cold, dark days of the season. We know there will be an end to it. But the night comes on early...like by 4:30 in the afternoon the light of the day is starting to fade and my life here in the caravan, without electricity has adjusted to the cycles of dark and light rather than the artificial rhythms that electric light allow. After my work day ends I usually hang out at the local coffee house until dark and then, braving the biting chill of the night, I pedal off to my parking spot. I turn on my burner and warm the place up and then usually climb into bed by 8 o'clock. Six hours later it's 2AM and I'm awake. I recently read how they have uncovered some old writings from the nineteenth century that refer to a "first sleep" and a "second sleep". Apparently, back then before electricity, when people had to watch TV by candlelight and laptops ran on kerosene, people slept twice in one night. That was the common thing. They would go to sleep with the sun, sleep 6 hours or so, then wake up and do stuff for a couple of hours, and then go back for their "second sleep". There are a lot of hours of darkness to fill when you run by the sun and stars. So that seems to be what my body has naturally adapted to. So here I am, writing this blog. 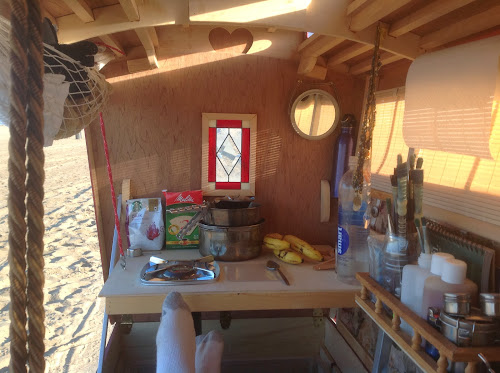 I've made a number of changes in the caravan since I first headed out on the road about 4 months ago, when it was warm, (sniff, sniff). When I sensed the coming winter I set about doing a few things to make it more cozy. Firstly, I got rid of the little pump up white gas stove that had to be used outdoors and installed a propane burner inside. This has been AWESOME! It allows me to sit up in bed and make coffee without the hassle of getting dressed and going outside and setting up the side table and pumping up the stove, etc. Plus it uses way less fuel than the white gas stove did and burns a lot cleaner. Another improvement I made was adding a pull out awning to the Starboard side and a storm cover for the windows on the Port side. The awning has been also awesome as it keeps the rain and dew well away from the little roll down shade that serves as my door. 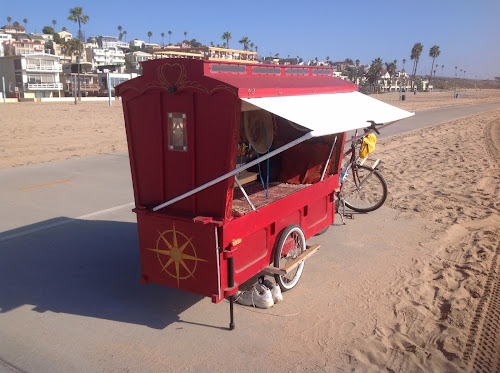 So when it rains I can actually have the shade rolled up, stay inside and make soup and watch the rain drip off the end of the awning. My most recent addition has been the flower pot heater. I saw this online and decided it was the perfect heating solution for my tiny space. The way it works is you take a small bread pan, put four or five of those little tea-lite candles in it, and invert a 6 inch clay flower pot over the candles, resting on the edges of the bread pan. It will burn for about 4 or 5 hours and does a great job taking the chill out of the air, and you can simply light it and go to bed without worrying about it. I decided to build it into the galley counter so it would take less space. When it's not in use I put a cutting board over it. It would work even better if my caravan wasn't so open air, but at the moment there is no shortage of ventilation. When I want to really heat it up quickly I put the flower pot on the propane burner and turn it on as low as it will go...the flower pot heats up and radiates a lot of heat, even after the burner is turned off. It's made life much more comfortable now that the Winter weather has arrived. We are finally getting a break though. This week is promising temps up into the 70's, and, while it's not the 80's, I can deal with it. Well, I think it's time for my "second sleep" now. It's 3:36 and time for bed.

Posted with Blogsy
Posted by BARRY HOWARD at 10:47 AM 13 comments: