Quite a few of my wanderings have been on two wheels...sometimes by motorcycle and sometimes by bicycle. This story is about one of those bicycle trips. I had been living in Key West at the time and decided to head toward the California Coast by way of bicycle. I scrounged up some old bike parts and assembled a three speed bike that only had one working speed. I didn't think that was too critical because I was traveling through Florida at the time, and Florida is flat. It was not a modern light weight touring bike by any means...I had a rack on the back and mounted an old wooden coca-cola box back there to make a sort of pickup bed where I could keep my food. I put a little herb and spice rack in it, upright against the back of my seat...that's where I kept my various herbs and spices and my bead stash. Then I lashed my bedroll onto one side of the rack and and hung a bag made from an old persian rug on the other side for my clothes. Over the front wheel I mounted a wooden box that carried my art supplies. It had a picture of Ganesh the elephant god, Hindu patron saint of travelers. Mounted on the lower frame I placed a Galliano bottle wrapped in woven palm leaves to carry water in....so yeh, not super light weight. My first challenge was making it up the 131 miles of bridges that connect the Florida Keys. In those days, (this is the early 70's) the bridges were very narrow, just a lane wide enough for a car and then a little curb with a railing. The longest bridge was seven miles, and that one I decided to cross in the middle of the night when traffic would be lightest. It was terrifying. I started over it at 2AM and could watch the headlights from an approaching truck coming up behind me from a long way back. When it got fairly close, I would lift the bike up onto the curb, which wasn't really wide enough to stand the bike straight up on, then i would straddle the railing, leaning out over the abyss and the ocean below and hold onto the handlebars with one hand, trying to get as much room between me and the semi-truck bearing down on me as I could. The lights on the bike worked by one of those little generator things that rub against the wheel, so they only work when the bike is moving...which meant I was pretty much invisible to the truck. Just about the time the truck's headlights hit me, and the driver realized I was there with my bike kind of leaning into the lane, he would try to swerve but by then there wasn't really time and he would thunder by, shaking the bridge, me hanging on for dear life out over the water. So this was how the whole trip over the seven mile bridge went....pedal, pedal, pedal...put the bike up on the curb, straddle the railing, lean out, and FA-WHOOM! The truck thunders by inches away. By the time I got to the other side I was exhausted and put down my bedroll and fell asleep right next to highway one.

But as it turned out, that wasn't the most dangerous part of the trip. When I got to Alligator Alley, the narrow highway that runs through the Everglades I was literally getting blown off the road by the slipstream from the huge trucks that were roaring up through there. I rode on and on into the night and it was hot and humid and I couldn't stop and rest because when I did the mosquitos would have me for a late night snack. As long as I kept moving the breeze kept them off of me. Somewhere around 2AM the next morning I came upon a little bar out in the middle of nowhere. It was open and there were three pick-up trucks parked outside. The idea of getting out of the bugs and taking a break seemed great and besides, I was pretty exhausted. I pushed open the door and found myself looking at a long bar occupied by three cowboys. I could tell they were cowboys because they wore cowboy hats and cowboy boots and cowboy shirts. I wasn't wearing any of those things. 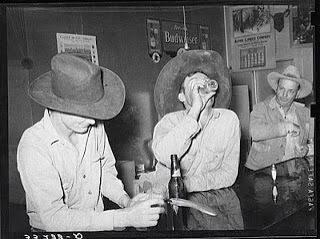 I had a Stetson Open Road hat (kind of a Clyde Barrow sort of style) with my paintbrushes stuffed into the macrame hatband. My hair was to my shoulders, my jeans had been patched with the skin from a roadkill rattlesnake I had found and skinned in the desert, plus other patches of velvet, satin, leather and various other bright colorful fabrics. I wore a necklace I had made from bones and beads that had some sort of small animal skull I had found, hanging from the middle of it. Various pouches hung from my belt. I stood in the doorway and the three cowboy hats turned and looked at me...then the bartender, wiping a beer mug with a rag, turned and looked at me....then he looked at the three cowboys and then he looked at me. The cowboys had been there drinking for hours and were obviously pretty drunk. All sorts of thoughts flooded my mind at that moment...the first was, "TURN AROUND AND RUN FOR IT!" But I immediately realized this would be folly. I was way out in the middle of nowhere, there was only one road through it, I was on a bicycle and the cowboys had pick-up trucks. There would be no escape. So...I walked up to the bar and sat down next to one of the cowboys. Immediately the other two slid off their barstools and one stood behind me and the other moved up next to me on the other side. I was surrounded.

"Well whadda we got here?" slurred one of the cowboys.

"What I can't figure out, "began the other," is, is it a boy or a girl?"...he punctuated his query with a loud belch.

"What the hell are you anyway?" said the third, rhetorically I assumed. I decided to answer anyway. I figured that they must have somehow found me threatening to their way of life and to the very fabric of society because I looked so unfamiliar to them. My task was to convince them otherwise.

"After a few more slurred slurs aimed at me I decided that I better try to engage them in conversation, and maybe, if I was lucky I could get out of this alive. 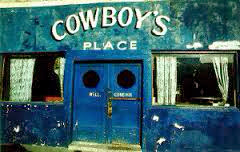 "I know I must look pretty strange to you guys," I said, "But that's because I'm not from around here. I come from the west coast and most people where I am from look a lot like me, because that's normal there. We have different customs and different styles of dress out there. In fact" I said, "if you were to go there, people might think you looked strange to them, because they wouldn't be use to seeing people like you. But even though I may look odd to you," I continued" I'm probably not all that different in most ways. I believe in being a good person, and being honest and working hard. I love my country and my family and I am thankful that I live in a free country." OK, I was laying it on a bit thick here, but the occasion seemed to call for it. Well from there we all four got involved in a long conversation...I, playing the part of the visitor from another planet and they were just drunk enough that they were willing to listen to what I had to say, swaying and swigging beer as I talked. Somehow, I guess I said all the right things because within the hour I was their buddy. They were slapping me on the back and insisting on buying me beers. We had a pretty good time together. After a couple of hours I bid them farewell, shaking hands all around and stumbled out the door and got back on my bicycle. The cowboys all got in their pick up trucks and roared off, waving and wishing me safe travels. I pedaled off up Alligator Alley, feeling refreshed after my rest stop, smiling with the warmth of newfound friendship and a good beer buzz.

Posted with Blogsy
Posted by BARRY HOWARD at 2:04 PM No comments: